So if Storybook is the first phase of creating/updating a component, phase two must be confirming the functionality with a test. Let's add a test for our new summary feature.

If you've never done any kind of testing before this may be a little hard to follow. We've got a great document all about testing (including some philosophy, for those so inclined) if you want a good overview of testing in general. We even build a super-simple test runner from scratch in plain Javascript to take some of the mystery out of how this all works!

First let's run the existing suite to see if we broke anything:

Well that didn't take long! Can you guess what we broke? 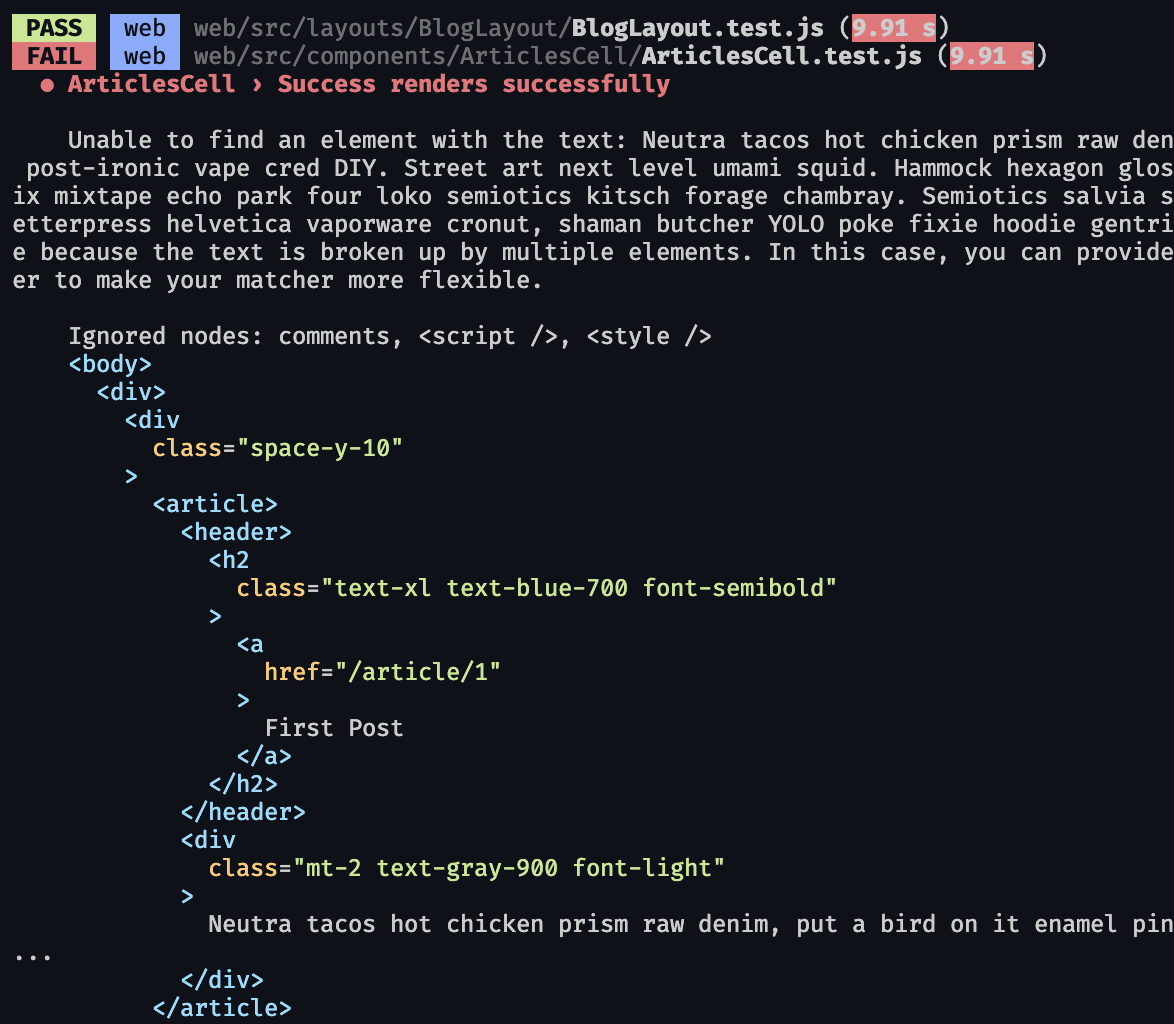 Let's update the test so that it checks for the expected behavior instead. There are entire books written on the best way to test, so no matter what we decide on testing in this code there will be someone out there to tell us we're doing it wrong. As just one example, the simplest test would be to just copy what's output and use that for the text in the test:

But the truncation length could change later, so how do we encapsulate that in our test? Or should we? The number of characters to truncate to is hardcoded in the Article component, which this component shouldn't really care about about: it should be up to the page that's presenting the article to determine much or how little to show (based on space concerns, design constraints, etc.) don't you think? Even if we refactored the truncate() function into a shared place and imported it into both Article and this test, the test will still be knowing too much about Article—why should it have detailed knowledge of the internals of Article and that it's making use of this truncate() function at all? It shouldn't! One theory of testing says that the thing you're testing should be a black box: you can't see inside of it, all you can test is what data comes out when you send certain data in.

Let's compromise—by virtue of the fact that this functionality has a prop called "summary" we can guess that it's doing something to shorten the text. So what if we test three things that we can make reasonable assumptions about right now:

This gives us a buffer if we decide to truncate to something like 25 words, or even if we go up to a couple of hundred. What it doesn't encompass, however, is the case where the body of the blog post is shorter than the truncate limit. In that case the full text would be present, and we should probably update the truncate() function to not add the ... in that case. We'll leave adding that functionality and test case up to you to add in your free time. ;)

Okay, let's do this:

This loops through each article in our standard() mock and for each one:

Search through the rendered HTML on the screen and find the HTML element that contains the truncated body (note the { exact: false } here, as normally the exact text, and only that text, would need to be present, but in this case there's probably more than just the 10 characters)

Within the HTML element that was found in the previous line, find ..., again without an exact match

Find the title of the article in the page

When trying to find the full text of the body, it should not be present

Assert that the truncated text is present

Assert that the ellipsis is present

As soon as you saved that test file the test should have run and passed! Press a to run the whole suite if you want to make sure nothing else broke. Remember to press o to go back to only testing changes again. (There's nothing wrong with running the full test suite each time, but it will take longer than only testing the things that have changed since the last time you committed your code.)

getByText() will throw an error if the text isn't found in the document, whereas queryByText() will return null and let you continue with your testing (and is one way to test that some text is not present on the page). You can read more about these in the DOM Testing Library Queries docs.

To double check that we're testing what we think we're testing, open up ArticlesCell.js and remove the summary={true} prop (or set it to false) and the test should fail: now the full body of the post is on the page and expect(screen.queryByText(post.body)).not.toBeInTheDocument() is in the document! Make sure to put the summary={true} back before we continue.

What's the Deal with Mocks?#

Mocks are used when you want to define the data that would normally be returned by GraphQL. In cells, a GraphQL call goes out (the query defined by QUERY) and returned to the Success component. We don't want to have to run the api-side server and have real data in the database just for Storybook or our tests, so Redwood intercepts those GraphQL calls and returns the data from the mock instead.

If the server is being mocked, how do we test the api-side code?

We'll get to that next when we create a new feature for our blog from scratch!

The names you give your mocks are then available in your tests and stories files. Just import the one you want to use (standard is imported for you in generated test files) and you can use the spread syntax to pass it through to your Success component.

The first key in the object that's returned is named articles. That's also the name of the prop that's expected to be sent into Success in the cell:

So we can just spread the result of standard() in a story or test when using the Success component and everything works out:

Some folks find this syntax a little too succinct and would rather see the <Success> component being invoked the same way it is in their actual code. If that sounds like you, skip the spread syntax and just call the articles property on standard() the old fashoined way:

You can have as many mocks as you want, just import the names of the ones you need and send them in as props to your components.

Our test suite is passing again but it's a trick! We never added a test for the actual summary functionality that we added to the Article component. We tested that ArticlesCell requests that Article return a summary, but what it means to render a summary is knowledge that only Article contains.

When you get into the flow of building your app it can be very easy to overlook testing functionality like this. Wasn't it Winston Churchill who said "a thorough test suite requires eternal vigilance"? Techniques like Test Driven Development (TDD) were established to help combat this tendency—write the test first, watch it fail, then write the code to make the test pass so that you know every line of real code you write is backed by a test. What we're doing is affectionately known as Development Driven Testing. You'll probably settle somewhere in the middle but one maxim is always true—some tests are better than no tests.

The summary functionality in Article is pretty simple, but there are a couple of different ways we could test it:

In this case truncate() "belongs to" Article and the outside world really shouldn't need to worry about it or know that it exists. If we came to a point in development where another component needed to truncate text then that would be a perfect time to move this function to a shared location and import it into both components that need it. truncate() could then have its own dedicated test. But for now let's keep our separation of concerns and test the one thing that's "public" about this component—the result of the render.

In this case let's just test that the output matches an exact string. You could spin yourself in circles trying to refactor the code to make it absolutely bulletproof to code changes breaking the tests, but will you ever actually need that level of flexibility? It's always a trade-off!

We'll move the sample post data to a constant and then use it in both the existing test (which tests that not passing the summary prop at all results in the full body being rendered) and our new test that checks for the summary version being rendered:

Saving that change should run the tests and we'll see that our suite is still happy!

Remember we set the summary prop to default to false if it doesn't exist, which is tested by the first test case (passing no summary prop at all). However, we don't have a test that checks what happens if false is set explicitly. Feel free to add that now if you want 100% Code Coverage!