Let's take a moment to appreciate how amazing this is—we built, designed and tested a completely new component for our app, which displays data from an API call (which would pull that data from a database) without actually having to build any of that backend functionality! Redwood let us provide fake data to Storybook and Jest so we could get our component working.

Unfortunately, even with all of this flexibility there's still no such thing as a free lunch. Eventually we're going to have to actually do that backend work. Now's the time.

If you went through the first part of the tutorial you should be somewhat familiar with this flow:

Let's do that now:

Most of these lines look very similar to what we've already seen, but this is the first instance of a relation between two models. Comment gets two entries to denote this relationship:

This gives us a classic database model:

Note that there is no real database column named post in Comment—this is special syntax for Prisma to know how to connect the models together and for you to reference that connection. When you query for a Comment using Prisma you can get access to the attached Post using that name:

Prisma also added a convenience comments field to Post which gives us the same capability in reverse:

This one is easy enough: we'll create a new migration with a name and then run it:

You'll need to restart the test suite runner at this point if it's still running. You can do a Ctrl-C or just press q. Redwood creates a second, test database for you to run your tests against (it is at .redwood/test.db by default). The database migrations are run against that test database whenever the test suite is started, not while it's running, so you'll need to restart it to test against the new database structure.

Creating the SDL and Service#

Next we'll create the SDL (that defines the GraphQL interface) and a service (to get the records out of the database) with a generator call:

That command will create both the SDL and the service. One change we'll need to make to the generated code is to allow access to anonymous users to view all comments. Change the @requireAuth directive to @skipAuth instead:

Now if you take a look back at the real app in the browser (not Storybook) you should see a different message than the GraphQL error we were seeing before:

"Empty" means the Cell rendered correctly! There just aren't any comments in the database yet. Let's update the CommentsCell component to make that "Empty" message a little more friendly: 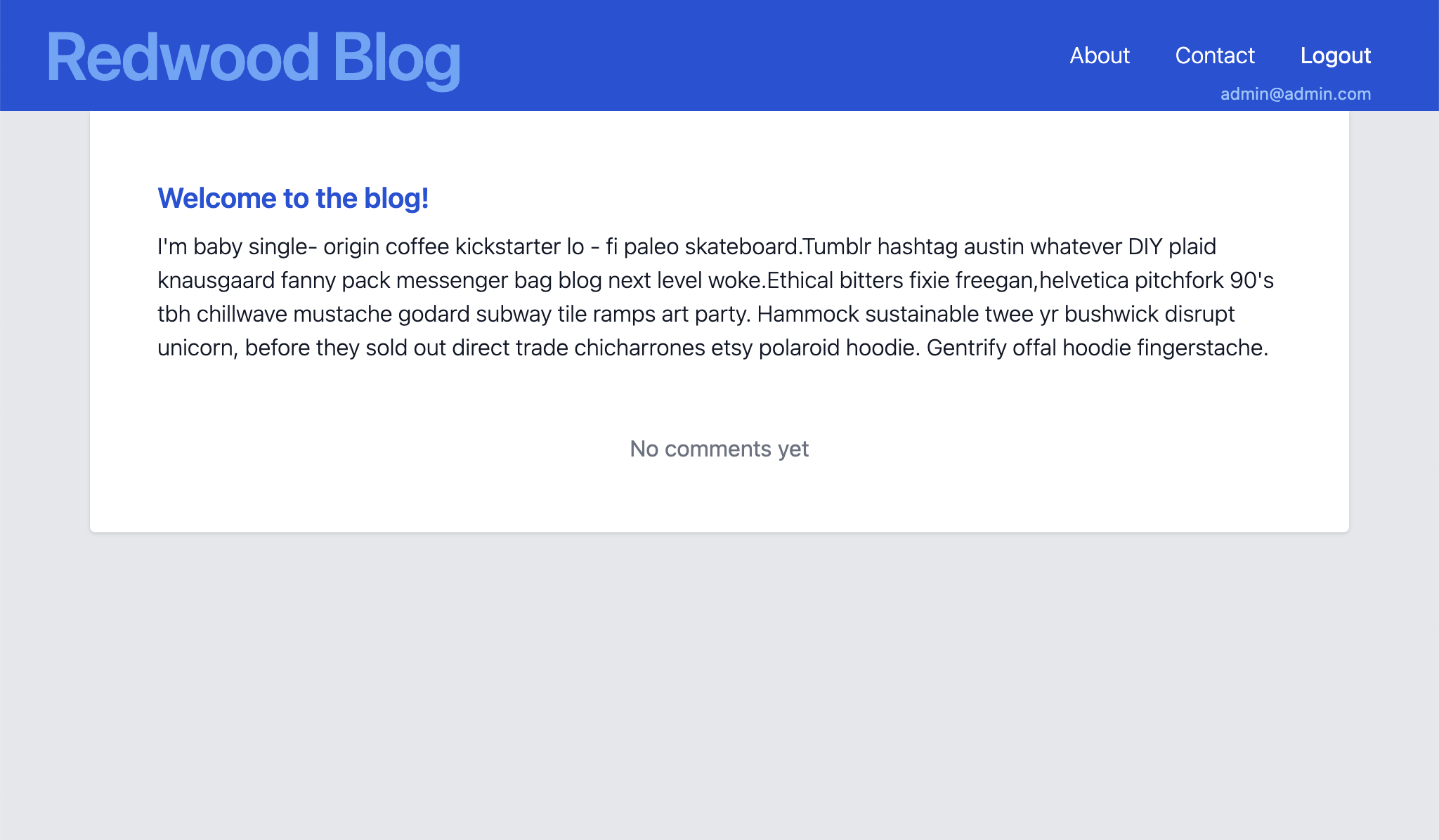 Okay, let's focus on the service for a bit. We'll need to add a function to let users create a new comment and we'll add a test that covers the new functionality.

Building out the Service#

By virtue of using the generator we've already got the function we need to select all comments from the database:

We've also got a function that returns only a single comment, as well as this Comment object at the end. That allows us to return nested post data for a comment through GraphQL using syntax like this (don't worry about adding this code to our app, this is just an example):

Have you noticed that something may be amiss? The comments() function returns all comments, and all comments only. Could this come back to bite us?

We need to be able to create a comment as well. We'll use the same convention that's used in Redwood's generated scaffolds: the create endpoint will accept a single parameter input which is an object with the individual model fields:

We'll also need to expose this function via GraphQL so we'll add a Mutation to the SDL and use @skipAuth since, again, it can be accessed by everyone:

The CreateCommentInput type was already created for us by the SDL generator.

That's all we need on the api-side to create a comment! But let's think for a moment: is there anything else we need to do with a comment? Let's make the decision that users won't be able to update an existing comment. And we don't need to select individual comments (remember earlier we talked about the possibility of each comment being responsible for its own API request and display, but we decided against it).

What about deleting a comment? We won't let a user delete their own comment, but as owners of the blog we should be able to delete/moderate them. So we'll need a delete function and API endpoint as well. Let's add those:

Since we only want owners of the blog to be able to delete comments, we'll use @requireAuth:

deleteComment will be given a single argument, the ID of the comment to delete, and it's required. A common pattern is to return the record that was just deleted in case you wanted to notify the user or some other system about the details of the thing that was just removed, so we'll do that here as well. But, you could just as well return null.

Let's make sure our service functionality is working and continues to work as we modify our app.

If you open up api/src/services/comments/comments.test.js you'll see there's one in there already, making sure that retrieving all comments (the default comments() function that was generated along with the service) works:

What is this scenario() function? That's made available by Redwood that mostly acts like Jest's built-in it() and test() functions, but with one important difference: it pre-seeds a test database with data that is then passed to you in the scenario argument. You can count on this data existing in the database and being reset between tests in case you make changes to it.

In the section on mocks you said relying on data in the database for testing was dumb?

Yes, all things being equal it would be great to not have these tests depend on a piece of software outside of our control.

However, the difference here is that in a service almost all of the logic you write will depend on moving data in and out of a database and it's much simpler to just let that code run and really access the database, rather than trying to mock and intercept each and every possible call that Prisma could make.

Not to mention that Prisma itself is currently under development and implementations could change at any time. Trying to keep pace with those changes and constantly keep mocks in sync would be a nightmare!

That being said, if you really wanted to you could use Jest's mocking utilities and completely mock the Prisma interface abstract the database away completely. But don't say we didn't warn you!

Where does that data come from? Take a look at the comments.scenarios.js file which is next door:

This calls a defineScenario() function which checks that your data structure matches what's defined in Prisma. Each scenario data object (for example, scenario.comment.one) is passed as-is to Prisma's create. That way you can customize the scenario object using any of Prisma's supported options.

The exported scenario here is named "standard." Remember when we worked on component tests and mocks, there was a special mock named standard which Redwood would use by default if you didn't specify a name? The same rule applies here! When we add a test for createComment() we'll see an example of using a different scenario with a unique name.

The nested structure of a scenario is defined like this:

When you receive the scenario argument in your test, the data key gets unwrapped so that you can reference fields like scenario.comment.one.name.

Why does every field just contain the string "String"?

When generating the service (and the test and scenarios) all we (Redwood) knows about your data is the types for each field as defined in schema.prisma, namely String, Integer or DateTime. So we add the simplest data possible that fulfills the type requirement by Prisma to get the data into the database. You should definitely replace this data with something that looks more like the real data your app will be expecting. In fact...

Let's replace that scenario data with something more like the real data our app will be expecting:

Note that we changed the names of the records from one and two to the names of the authors, jane and john. More on that later. Why didn't we include id or createdAt fields? We told Prisma, in schema.prisma, to assign defaults to these fields so they'll be set automatically when the records are created.

The test created by the service generator simply checks to make sure the same number of records are returned so changing the content of the data here won't affect the test.

Let's add our first service test by making sure that createComment() actually stores a new comment in the database. When creating a comment we're not as worried about existing data in the database so let's create a new scenario which only contains a post—the post we'll be linking the new comment to through the comment's postId field:

Now we can pass the postOnly scenario name as the first argument to a new scenario() test:

We pass an optional first argument to scenario() which is the named scenario to use, instead of the default of "standard."

We were able to use the id of the post that we created in our scenario because the scenarios contain the actual database data after being inserted, not just the few fields we defined in the scenario itself. In addition to id we could access createdAt which is defaulted to now() in the database.

We'll test that all the fields we give to the createComment() function are actually created in the database, and for good measure just make sure that createdAt is set to a non-null value. We could test that the actual timestamp is correct, but that involves freezing the Javascript Date object so that no matter how long the test takes, you can still compare the value to new Date which is right now, down to the millisecond. While possible, it's beyond the scope of our easy, breezy tutorial since it gets very gnarly!

What's up with the names for scenario data? posts.bark? Really?

This makes reasoning about your tests much nicer! Which of these would you rather work with:

"claire paid for an ebook using her visa credit card."

Okay, our comments service is feeling pretty solid now that we have our tests in place. The last step is add a form so that users can actually leave a comment on a blog post.

Mocks are used on the web site and scenarios are used on the api side. It might be helpful to remember that "mock" is a synonym for "fake", as in this-is-fake-data-not-really-in-the-database (so that we can create stories and tests in isolation without the api side getting involved). Whereas a scenario is real data in the database, it's just pre-set to some known state that we can rely on.